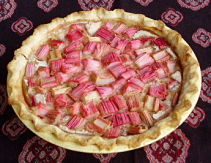 I promised a custard pie this month. The blues purists will be horrified, but my blues connection is Led Zeppelin’s “Custard Pie,” in all its sexual innuendo-laden glory. In creating it, they reached back to wonderful Delta tunes like Sleepy John Estes’ “Drop Down Mama,” Bukka White’s “Shake ‘Em On Down,” and Blind Boy Fuller’s “I Want Some of Your Pie.”

Like Led Zeppelin, I added something to the mix. In my case, it’s rhubarb. And the custard effect results from the combination of eggs, sugar, and rhubarb juices, rather than from eggs and milk.

When my husband was growing up, his family had a rhubarb plant in their yard, and one of his earliest cooking experiments was rhubarb pie. Now rhubarb is hard to find. We’ve tried several times to grow it but it doesn’t thrive in a yard overshadowed by huge trees.

Most grocery stores ignore it these days. Who’d want rhubarb when you can buy any fruit or vegetable you want all year round? In earlier times, rhubarb would have been appreciated as one of the first fresh growing things available in the spring.

I tracked mine down at the fancy Whole Foods store, an hour round trip for me because of New Jersey traffic, and $5.95 a pound!

It’s the standard crust we’ve used before so I’m recycling the instructions from earlier pies:

If you want to speed things up, you can use a prepared crust. I’ve discovered that the frozen crusts that come in their own little aluminum pie pans work very well. They are surprisingly flaky, and the only giveaway that they are not home-made is that the decorative edge is a bit too regular. I’ve also tried the prepared crusts that are sold in the refrigerator case, already shaped to go into your own pie pan and then curled up into long rolls that you unroll. Those are not so good.

A pinch of salt

Mix the filling well and spoon it into the prepared crust, smoothing it out evenly. Bake the pie at 400 degrees for 45 minutes or until the crust is nicely browned and the custard isn’t runny.

Next month: My childhood strawberry pie