This pie is named in honor of Eat a Peach, the legendary 1972 album of the Georgia-based Allman Brothers. Purists might argue that their music isn’t blues, but they introduced legions of white people to such classics as “Statesboro Blues,” and to me their version will always be the one I think of when I think of certain blues tunes. 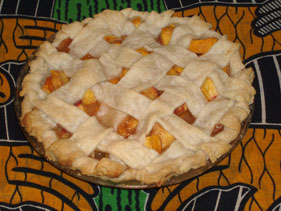 Eat-a-Peach Pie. The cloth is from Ghana and the design is giant hands.

What could be more Southern than peaches, that quintessential Georgia crop, even immortalized on the back of the Georgia quarter?

Peaches are seldom ripe when you buy them at the market, but they ripen on their own once you get them home. When I plan to make this pie, I buy the peaches a week in advance and put them in a bowl on my kitchen counter. As the week goes on, they become riper and riper till the whole kitchen smells like peaches and I can hardly wait to get started on my pie.

I discovered that using a bit more than the usual two cups of flour and correspondingly more of the shortening and water results in a much happier dough-rolling experience. You don’t have to worry about making a perfect circle or rolling the dough too thin in your quest to make it large enough to stretch over your pan. You will have a bit left over this way, but you can bake the scraps for 15 minutes or so and give them to people who are hanging around the kitchen dying to eat your pie.

This crust uses butter instead of vegetable shortening. You can taste the butter in it, and the buttery taste really complements the peaches.

Sift the dry ingredients into a medium-sized bowl. Cut the butter into the flour mixture using two knives in scissor fashion, or your fingers. The butter shouldn’t vanish entirely, because bits of butter melting as the crust bakes accounts for the flakiness. But any visible butter bits shouldn’t be larger than lentils, and most should be smaller. Sprinkle the ice water over the flour-butter moisture, starting with 1/3 of a cup. Toss the mixture with a fork while you sprinkle. The point is to get the flour to adhere in a ball but not be sticky. Use more ice water if necessary till you’re able to form the dough into two flat rounds like giant hamburger patties. Wrap each in plastic wrap and store in the freezer while you make the filling.

The peaches are easier to peel if you quarter them first. If you don’t keep whiskey around, you can buy a mini-bottle like on airplanes at most liquor stores. It’s just enough.

Roll out the larger piece of dough, turning it frequently and using plenty of flour so it doesn’t stick to your rolling surface. Fold it in quarters and gently set it in the pie pan, then unfold it and pat it so it fits down into the pie pan nicely. Trim the edges so they extend about half an inch beyond the edges of the pie pan.

Pile the filling into the pie shell.

Roll out the other piece of dough in more or less of a circle. Cut it into strips about an inch wide. You’ll have a little waste at the edges, but generally you want the strips to be graduated sizes. To make the lattice, which looks amazingly pretty but is not all that hard, do this: Lay five of the strips across the top of the filling at inch-wide intervals all going the same direction. Now fold strips number 2 and 4 almost all the way back and lay a strip across 1, 3, and 5 going the other direction. Pie crust is sturdier than you think and stands up quite well to being folded and unfolded, so don’t worry. Put strips 2 and 4 back in place, fold back 1, 3, and 5, and lay a strip that crosses 2 and 4. Then put 1, 3, and 5 back in place and fold back 2 and 4. Proceed like this till you’ve covered the whole top. I ended up with five strips in one direction and four in the other, but you can put five both ways if you can fit them in. Either way, it looks fine.

Now tuck the overhanging crust under all the way around and pat and smooth the lattice ends till they’re merged with the bottom crust. To make a fancy edge like in the picture, place the index and middle finger of your right hand on the edge pointing out and with half an inch between them. Use the thumb of your left hand to push a little ridge into the dough, working your way all around the edge of the pie doing the same thing.

You can serve it with vanilla ice cream or just the way it is.

Next month: A special banana cream pie with a secret ingredient. What do bananas have to do with blues? You’ll see.