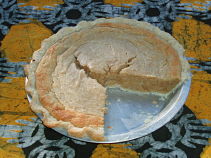 I used the lighter-colored sweet potatoes.

Sweet Potato Pie was reportedly President Obama’s favorite pie, and it’s one of my favorites too. I first posted this recipe the year he was inaugurated.

I first tasted Sweet Potato Pie during the student protests at San Francisco State University when I was a student there in the Sixties. Students were boycotting classes, spending their days marching with picket signs. One day a group of African-American students showed up with a gift of sweet potato turnovers—easier to eat while marching than an actual piece of pie. Those were heady times, and knowing black people as friends was an exotic experience for someone with my sheltered middle-class background.

Recipes for Sweet Potato Pie often say to use sweet potatoes or yams. But a true yam would be hard to come by in the U.S. The yam is an African staple, totally unrelated to the sweet potato, which is a New World plant.

When I was in Ghana studying percussion some years ago, I had the wonderful experience of watching people from the village plant a yam field, complete with work songs. The yam is such an important foodstuff in some parts of Africa that whole festivals revolve around it.

The U.S. has two varieties of sweet potato, however, one of which more closely resembles certain varieties of the African yam. The lighter-colored sweet potato is just that—a sweet potato, with a starchy potato-like texture. But there’s an orange-brown sweet potato with a moister texture and a sweeter taste. It’s often (mistakenly) referred to as a yam.

Sweet Potato Pie is such a staple of soul food that it’s tempting to suppose Africans transplanted to the U.S. recognized in the sweet potato a vegetable analogous to the yams they had known at home.

This is the same crust that we’ve used for some of the other pies.

Next, sprinkle the water over the flour, salt, shortening mixture and use a fork to toss and blend. Use more water if necessary, but only a little bit at a time. The dough should be moist enough to adhere together in a ball, but not sticky. Form the dough into a flat patty, using plenty of flour on your hands, then roll it out. Use plenty of flour on your rolling surface and rolling pin too. Turn the dough frequently as you roll it out, and sprinkle with more flour, so it doesn’t stick to the rolling surface.

And remember that the frozen crusts that come in their own aluminum pans work fine.

When I make this pie, I cook the sweet potatoes by baking rather than boiling. They can end up with too much moisture in them if you boil them and then your pie won’t set up nicely. I start with two large sweet potatoes and have more than enough. The amount of time you bake them depends on the size, but allow at least an hour at 400 degrees—be sure to poke the tops in several places with a fork or sharp knife. Otherwise they will explode in the oven and you’ll have a huge mess. Don’t poke the bottoms though or sweet juice will leak out and burn in your oven, also making a huge mess.

Scrape the cooked potato out of the shells, measure out 2 cups, and mash it thoroughly. Combine it with the butter, egg yolks, 1 cup of the sugar, the salt and spices, and the sour cream, blending very well. I use my electric mixer for this step.

Beat the egg whites slightly, add the remaining 1/4 cup sugar, and continue beating till they are stiff. Fold them into the sweet potato combination and pour it all into your unbaked pie shell. Bake 10 minutes at 400 degrees, then reduce the heat to 350 degrees and bake 30 more minutes, or until the edge is nicely browned but not burned and the filling does not wobble. You can also pat the top to make sure the filling has set up.

I serve it with slightly sweetened whipped cream.

Next month: A cherry pie inspired by a Miles Davis tune, and maybe George Washington too.