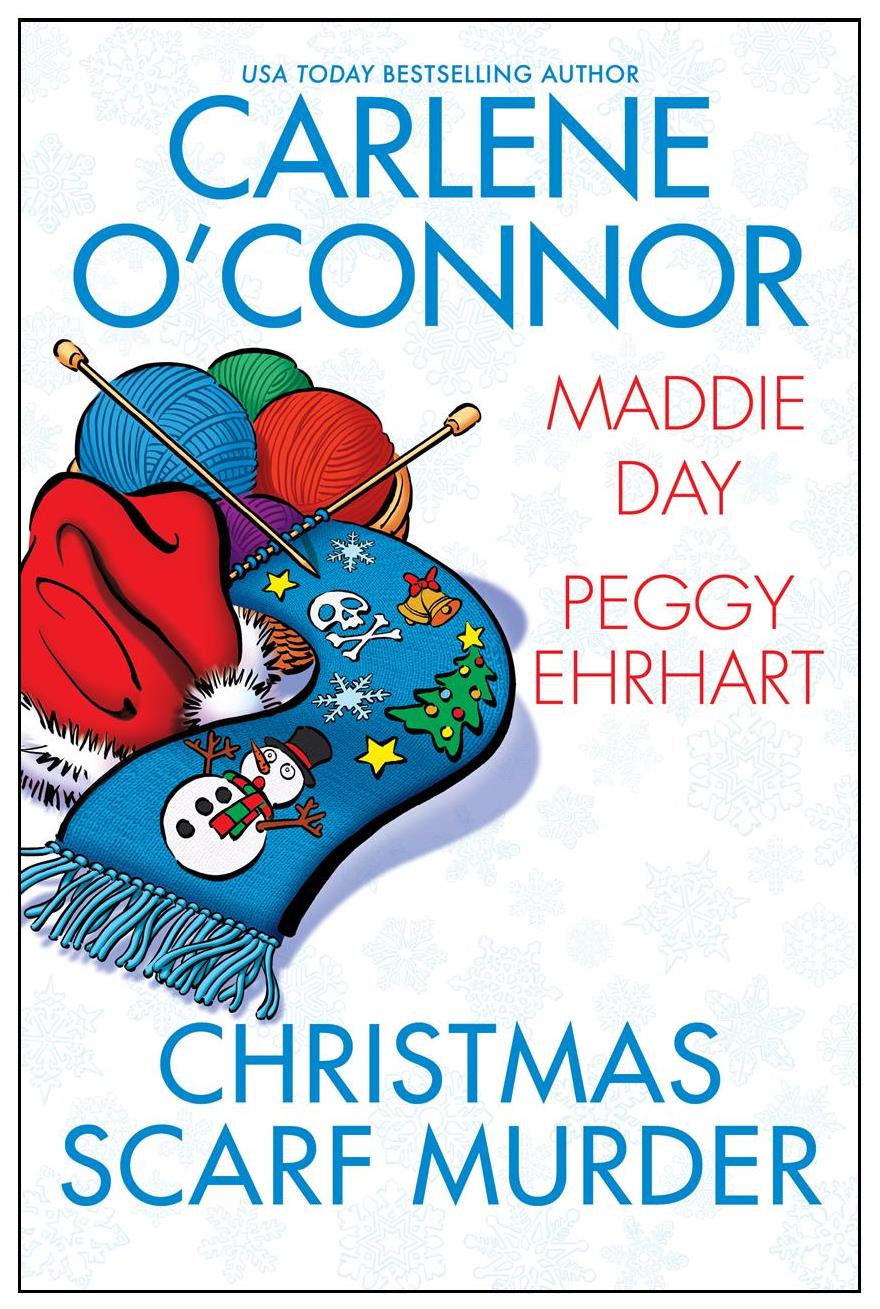 SCARFED DOWN by MADDIE DAY
It’s beginning to taste a lot like Christmas at Pans ‘N Pancakes, as twelve days of menu specials dazzle hungry locals. But the festivities go cold the instant a diner dies while knitting a brilliant green scarf. With Aunt Adele tied into a murder investigation, it’s all on Robbie Jordan to find out who’s really been naughty or nice in South Lick, Indiana.

DEATH BY CHRISTMAS SCARF by PEGGY EHRHART
Suspects pile up faster than New Jersey snow when frosty-tempered Carys Walnutt is found strangled by a handmade scarf auctioned at Arborville’s tree-lighting ceremony. Between a winning bidder hiding behind the alias “S. Claws” and a victim who deserved coal in her stocking, can Pamela Paterson and the crafty Knit and Nibble ladies freeze a killer’s merry murder plot?

“Three quick, enjoyable reads to get you in a murderous Christmas spirit.” —Kirkus Reviews

“Ms. Ehrhart constructs a terrific fair-play mystery that had me kicking myself for not seeing the motive sooner.”–Doreen Sheridan, Criminal Element. The review appears in the “Cooking the Books” feature, which also includes a step-by-step rendition of Maddie Day’s Roasted Chicken and Pears.

“With suspects galore, including the victim’s own sister and bitter brother-in-law, you’ll have a hard time coming up with a viable motive AND a viable killer.”–Wonder Women Sixty. Click here for the full review.

Here’s the cover for the large-print edition from Thorndike Press: 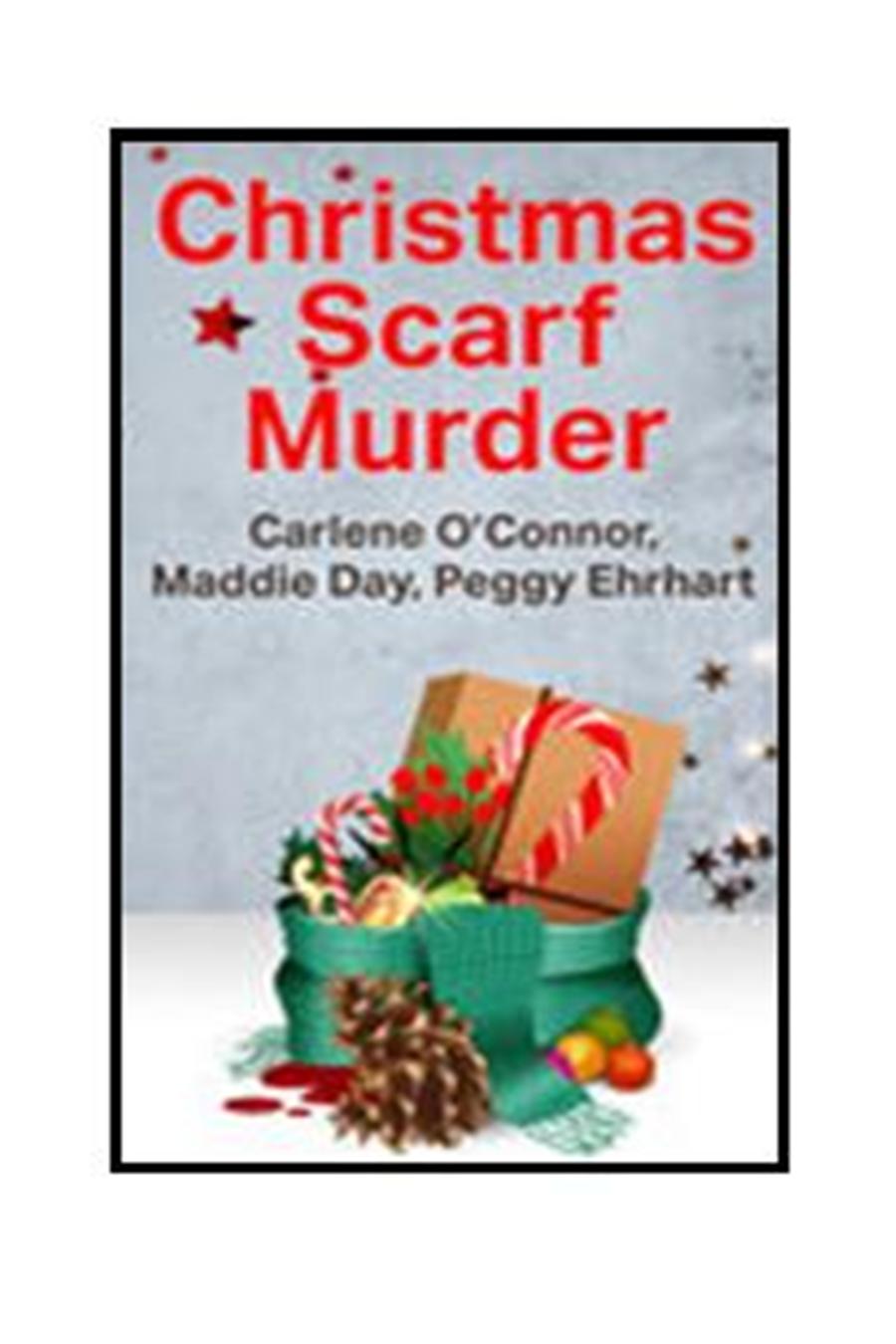 This project is a little more complicated than the KNIT projects in the previous books have been, but it’s great fun to do and the teddy bear would make a wonderful gift for a favorite child. Directions for Nell’s Cozy Teddy Bear appear at the end of Death by Christmas Scarf. 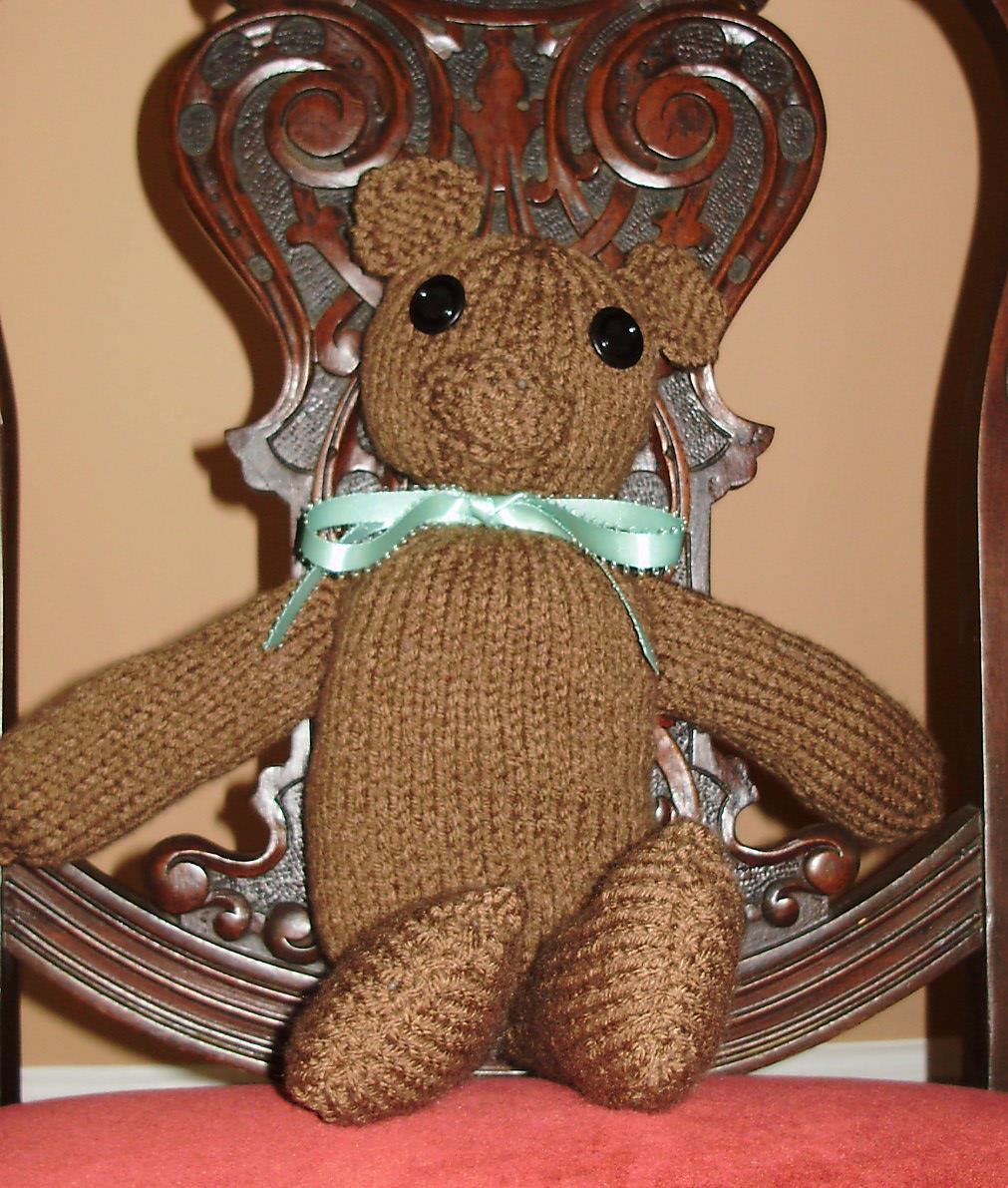 Cozy Teddy was such a satisfying project that I made another version: Polar Bear Teddy. 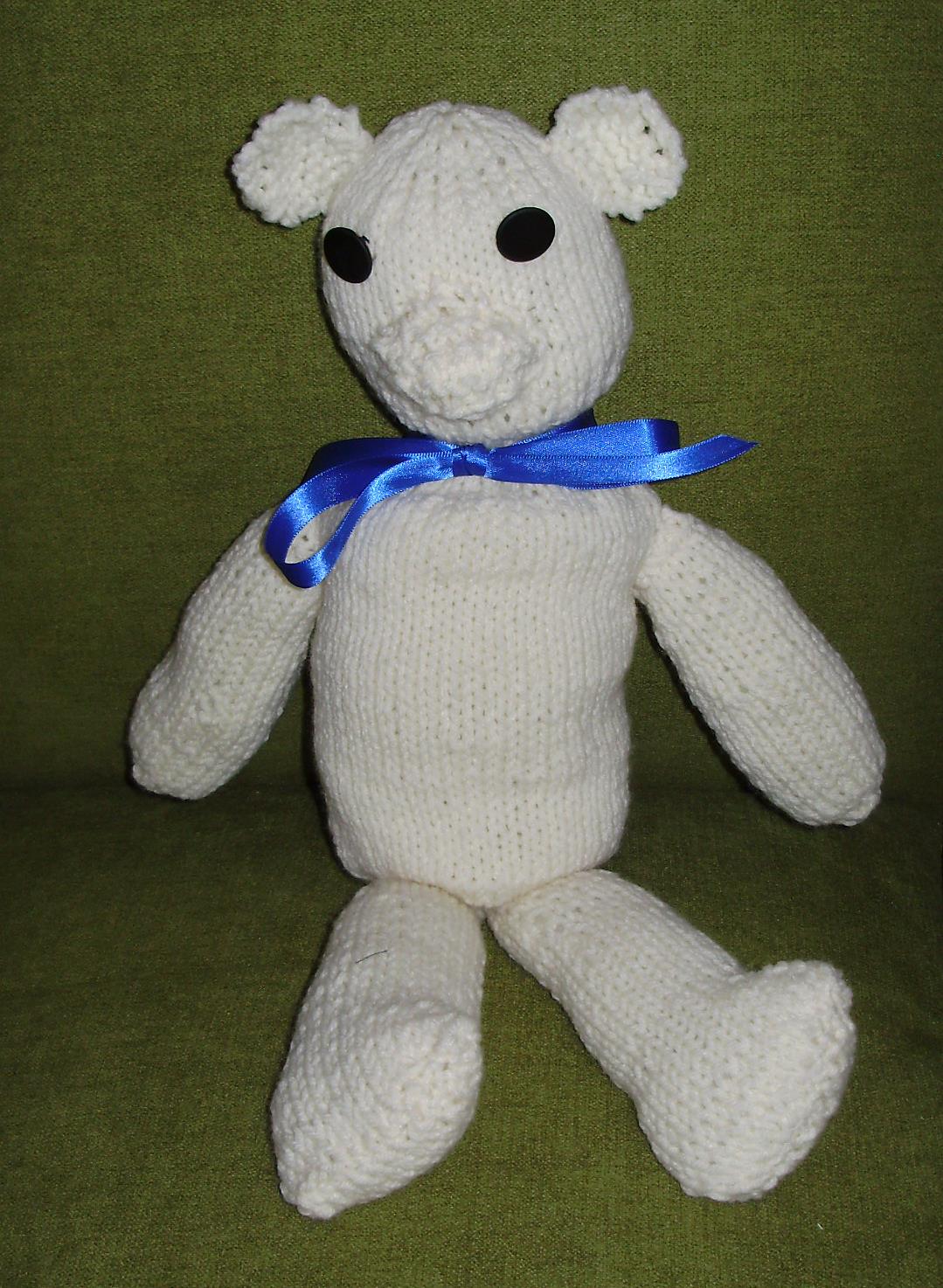 Here are some in-progress photos for both teddies.

Keeping track of how many rows have been knitted–useful for making sure one arm or leg doesn’t turn out longer than the other. 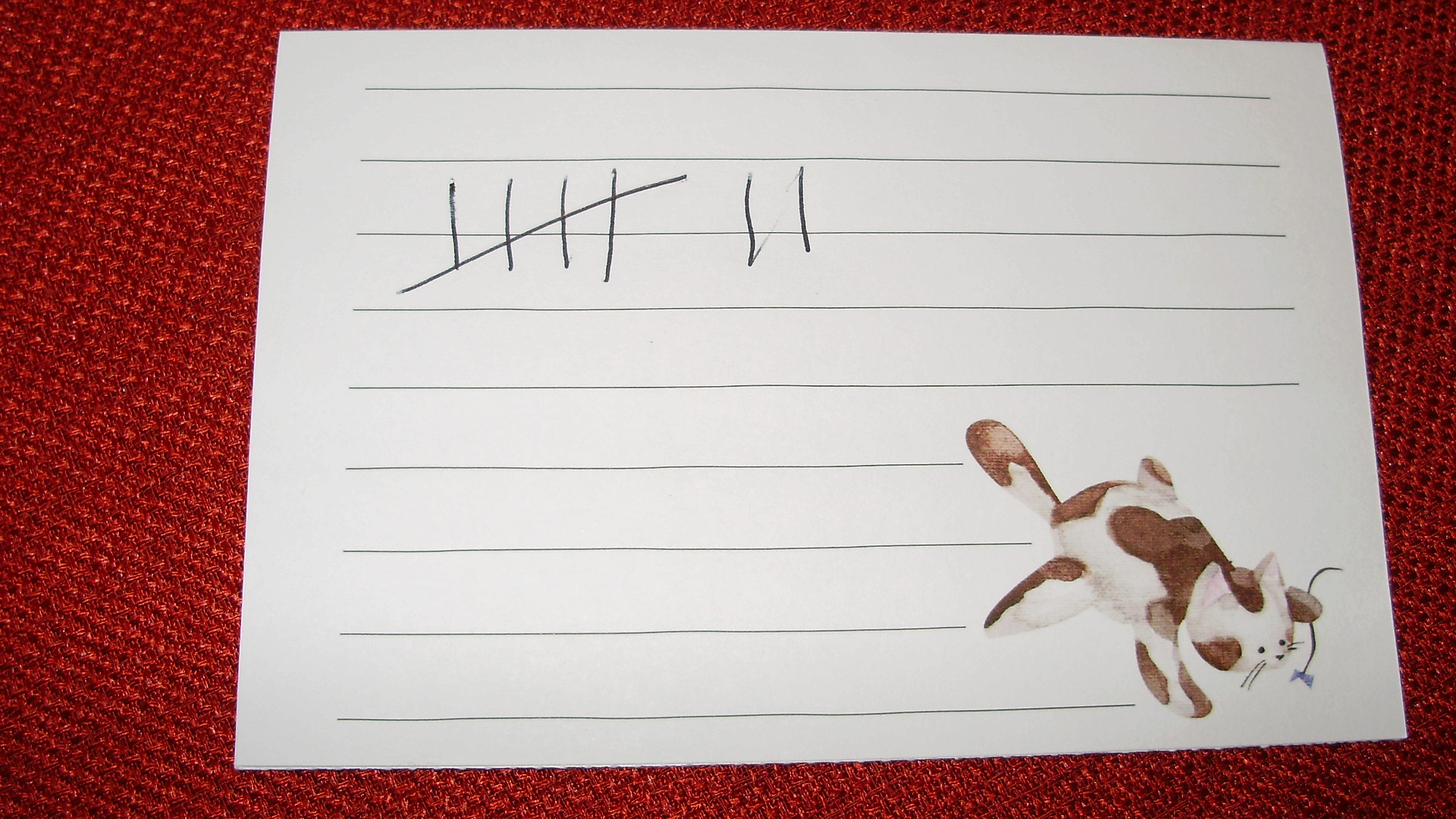 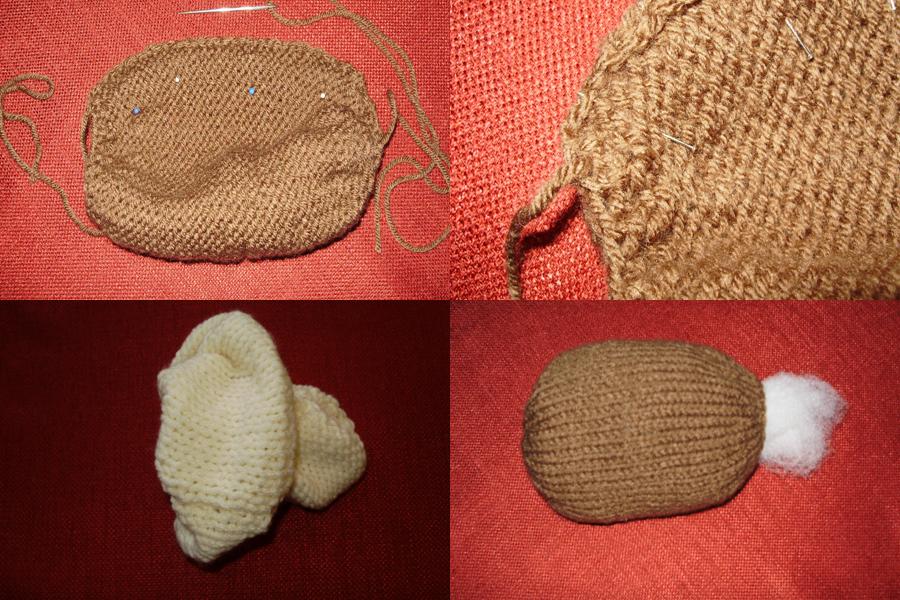 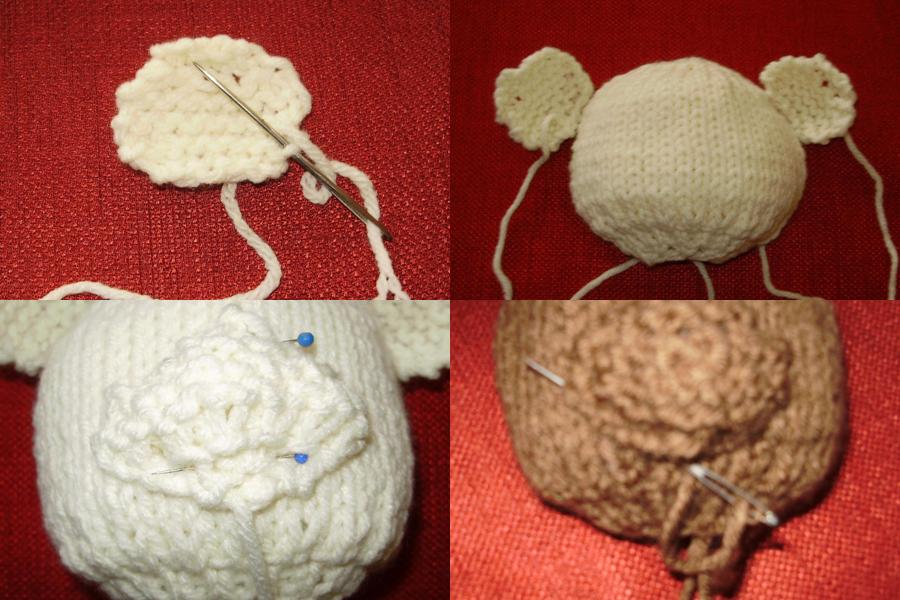 Positioning and sewing an arm. The procedure is the same for the legs. Top row: Thread your yarn needle with a length of yarn. Take a stitch in the side of the body right where you want the top of the arm opening to be attached. Tie a knot. Sew the top of the arm to that spot with one stitch. Bottom row: Take a long stitch, coming up at the spot where you want the bottom of the arm opening to be attached. Sew the bottom of the arm in place with one stitch. With the arm anchored in place, sew all the way around the opening. 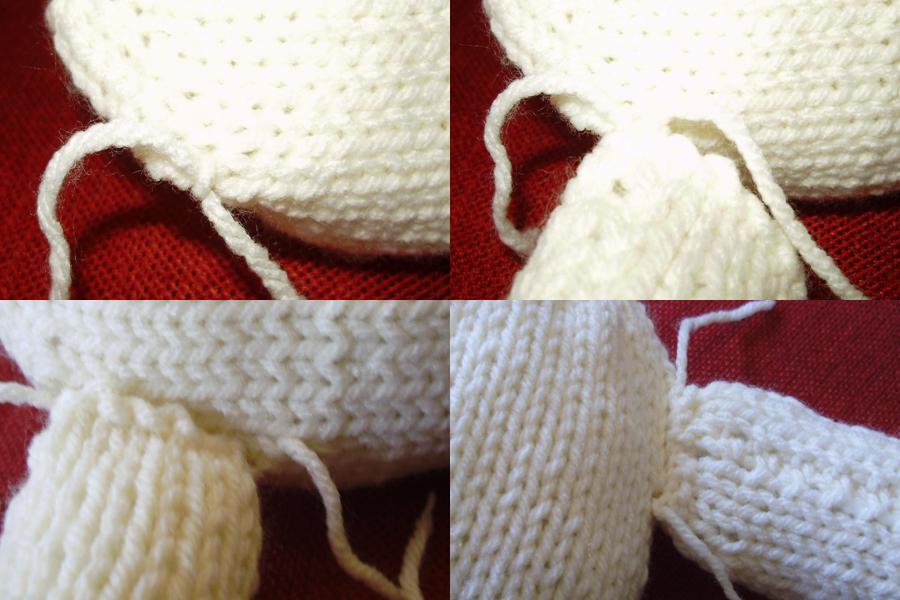 Top row: The seams on arms, legs, body, and head should all end up on the back of the bear. Bottom row: Head with eyes and bow. 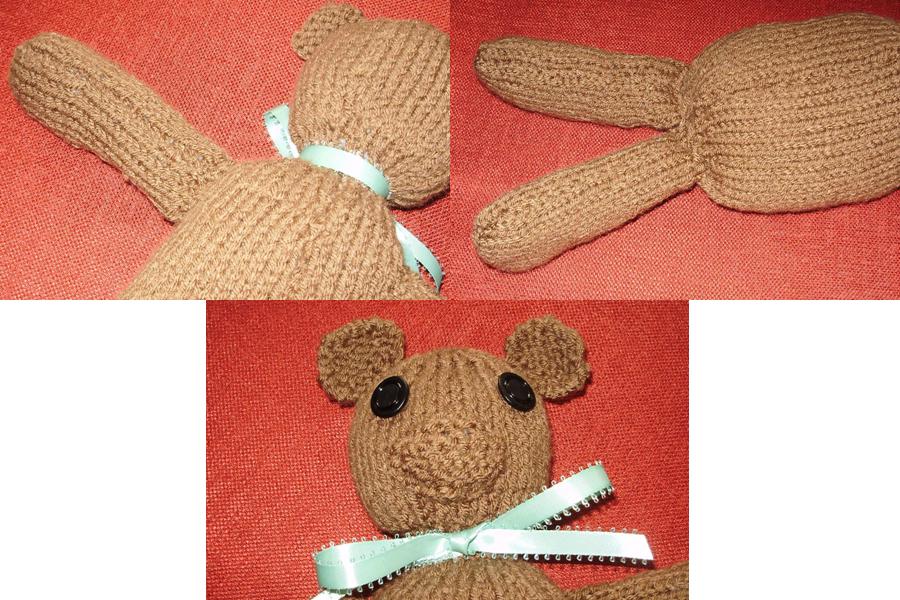 Merry Christmas to all!

Christmas and oranges seem to go together, perhaps because oranges were one of the few fresh fruits available in the winter before we could get anything at any time flown in from who knows where—though oranges themselves were imported from sunnier climes. You’ll find the recipe for Pamela’s Christmas Cake at the end of Death by Christmas Scarf. Here are a few in-progress photos. 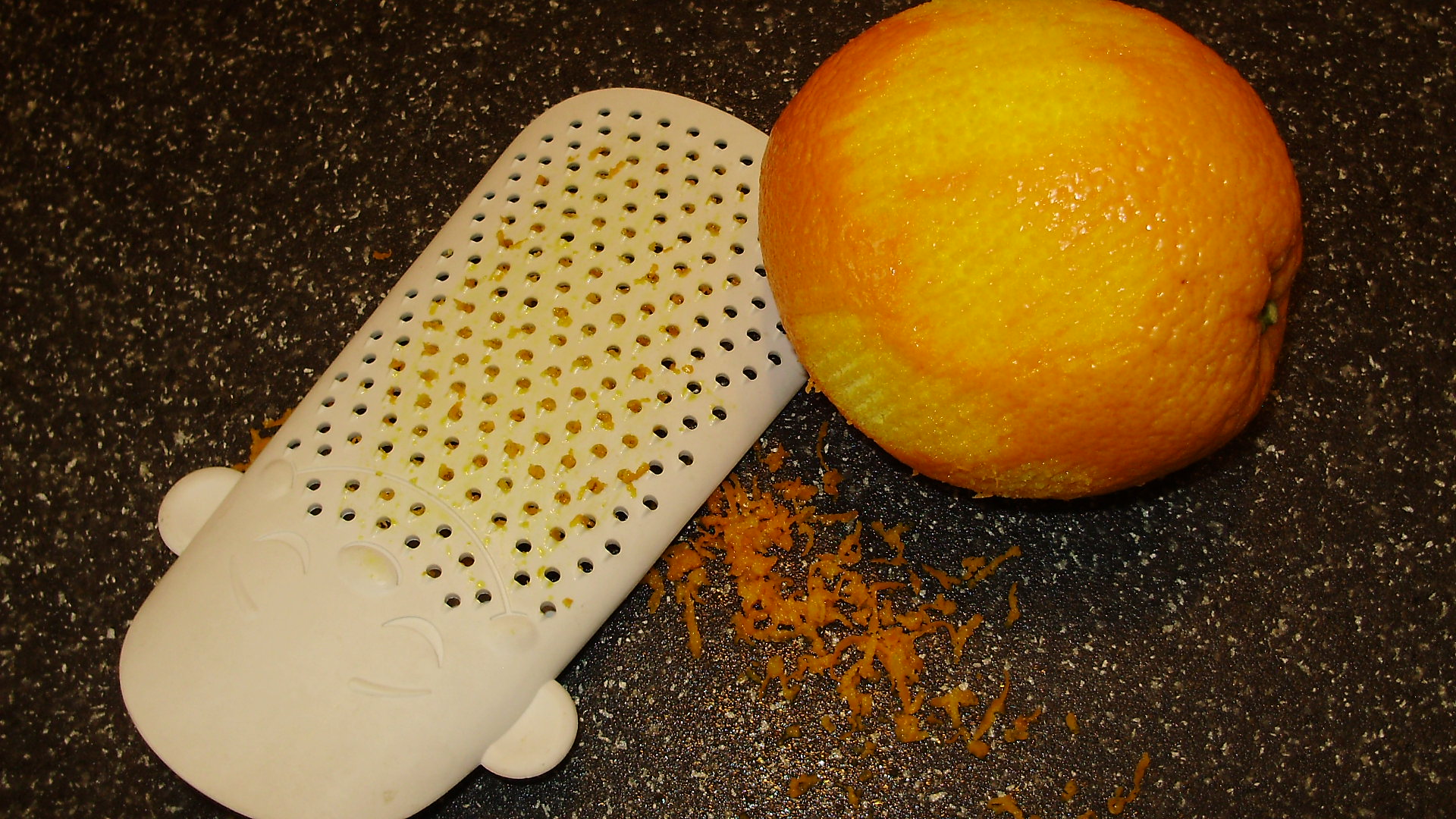 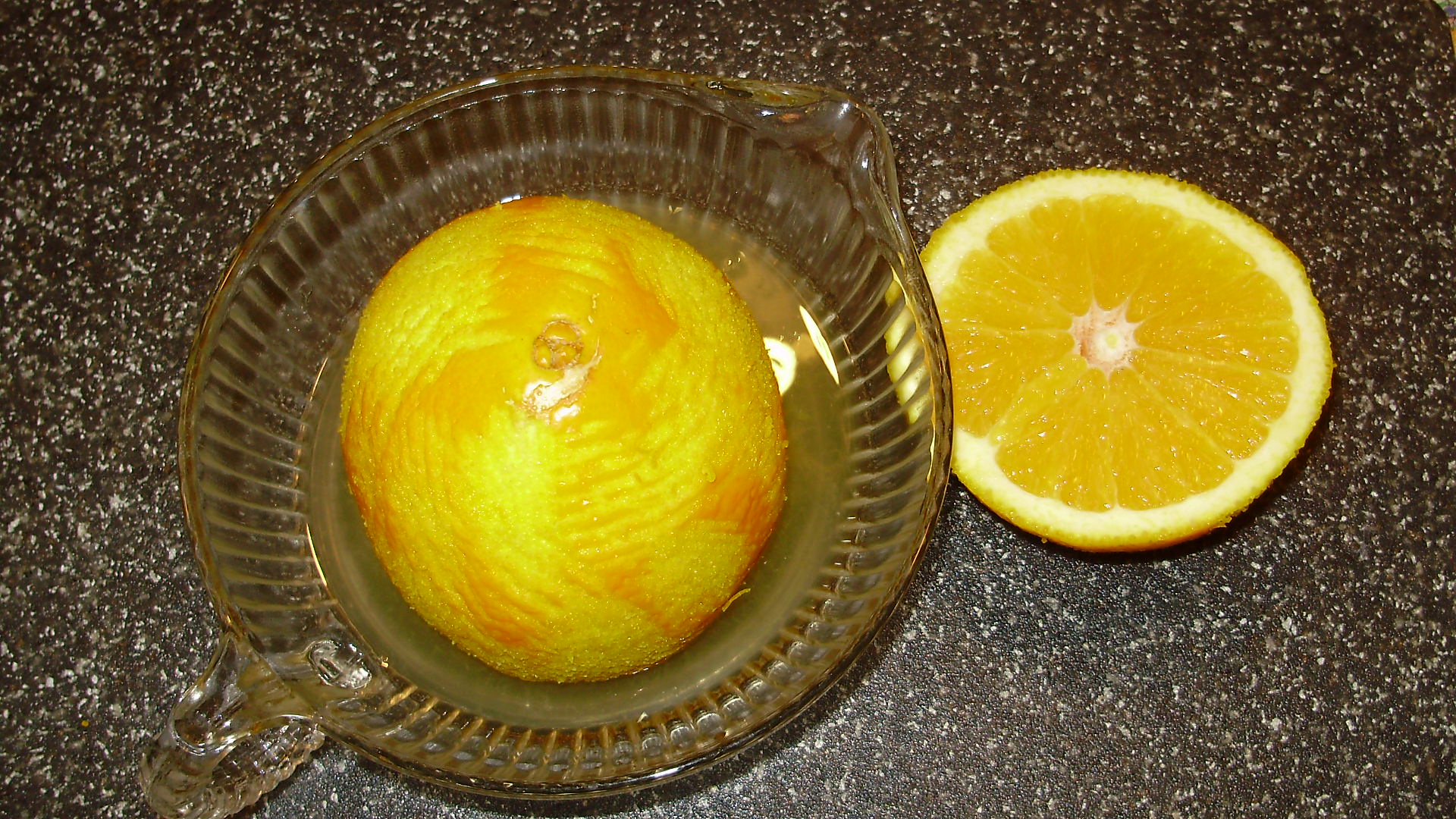 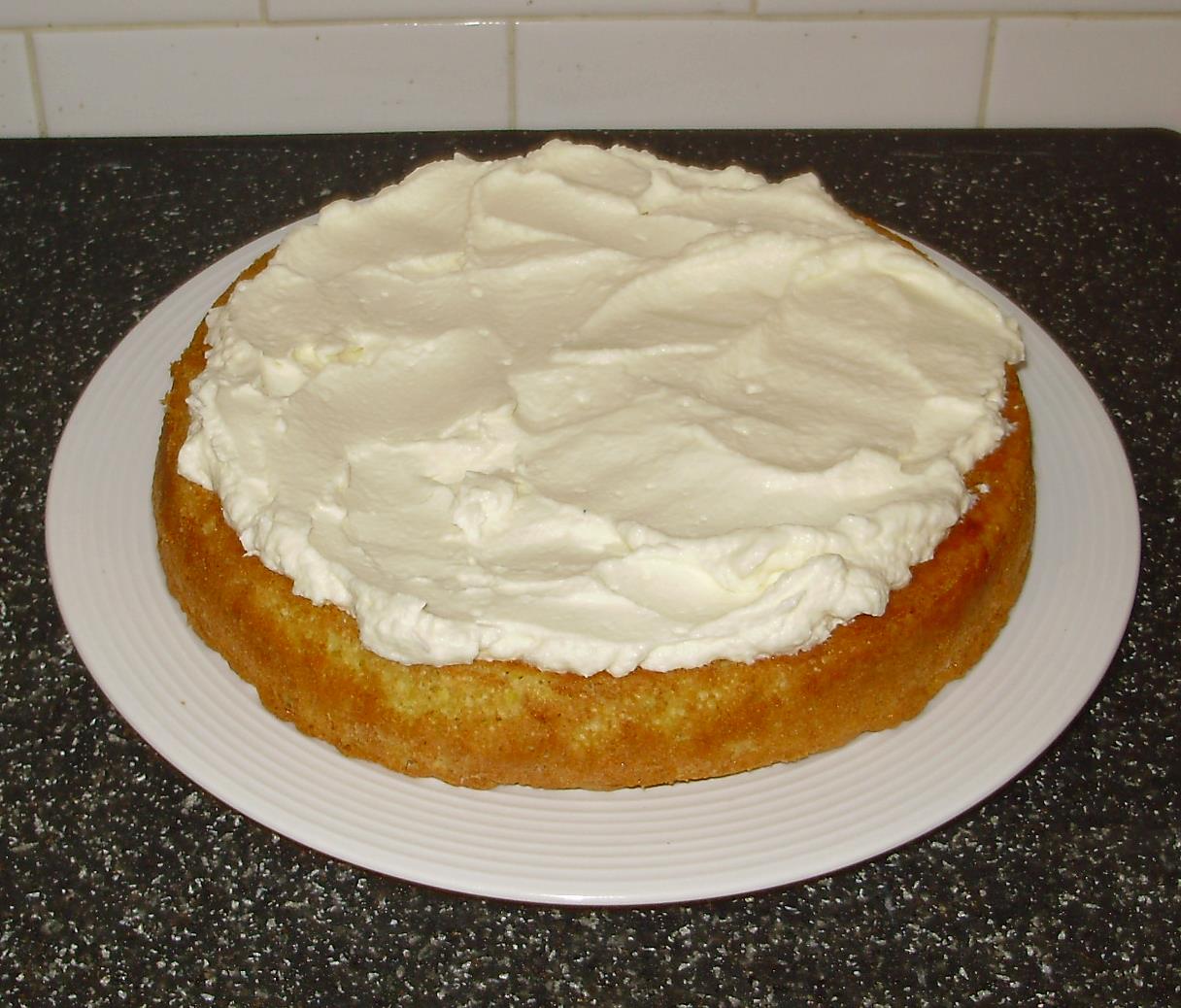 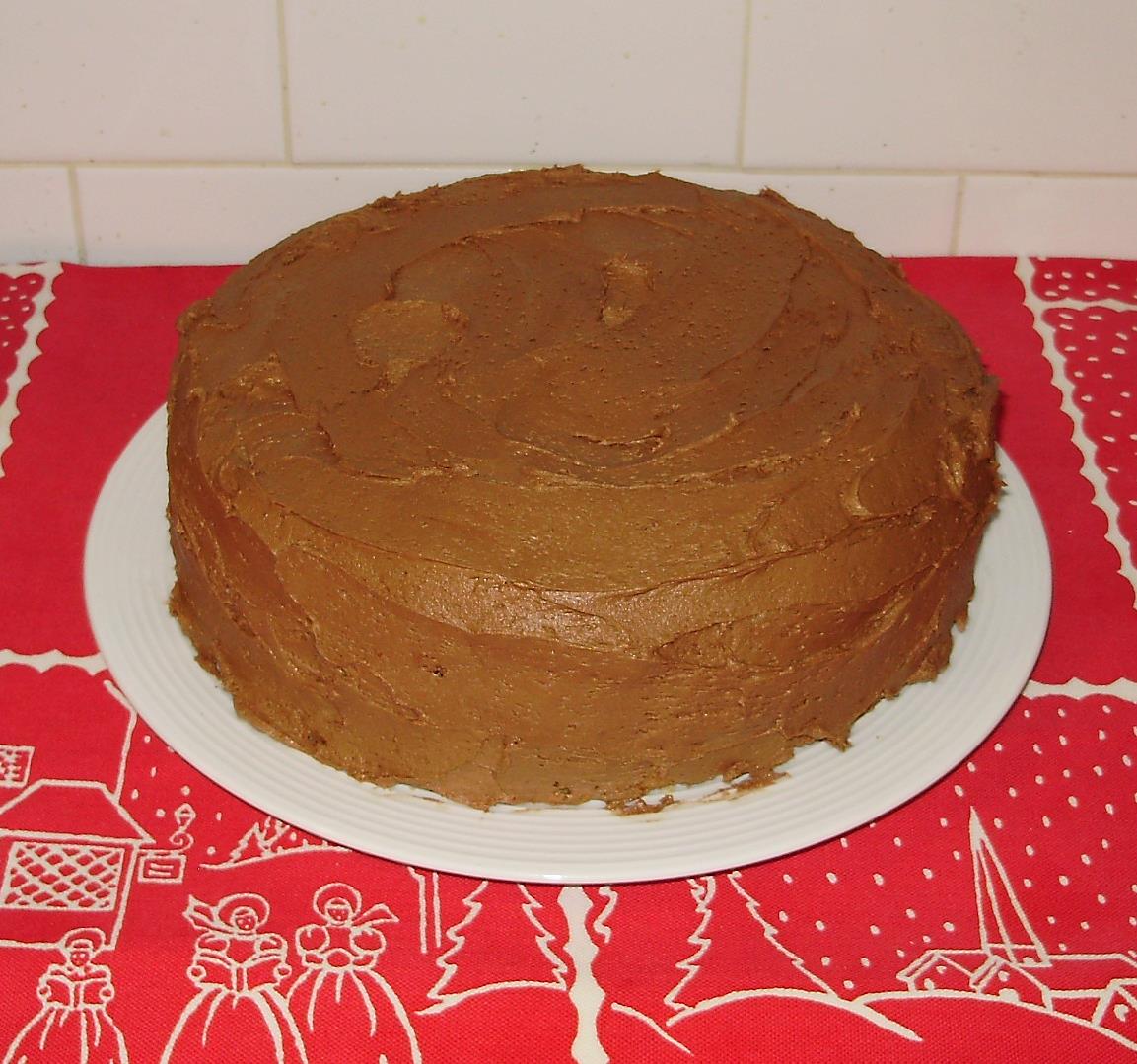 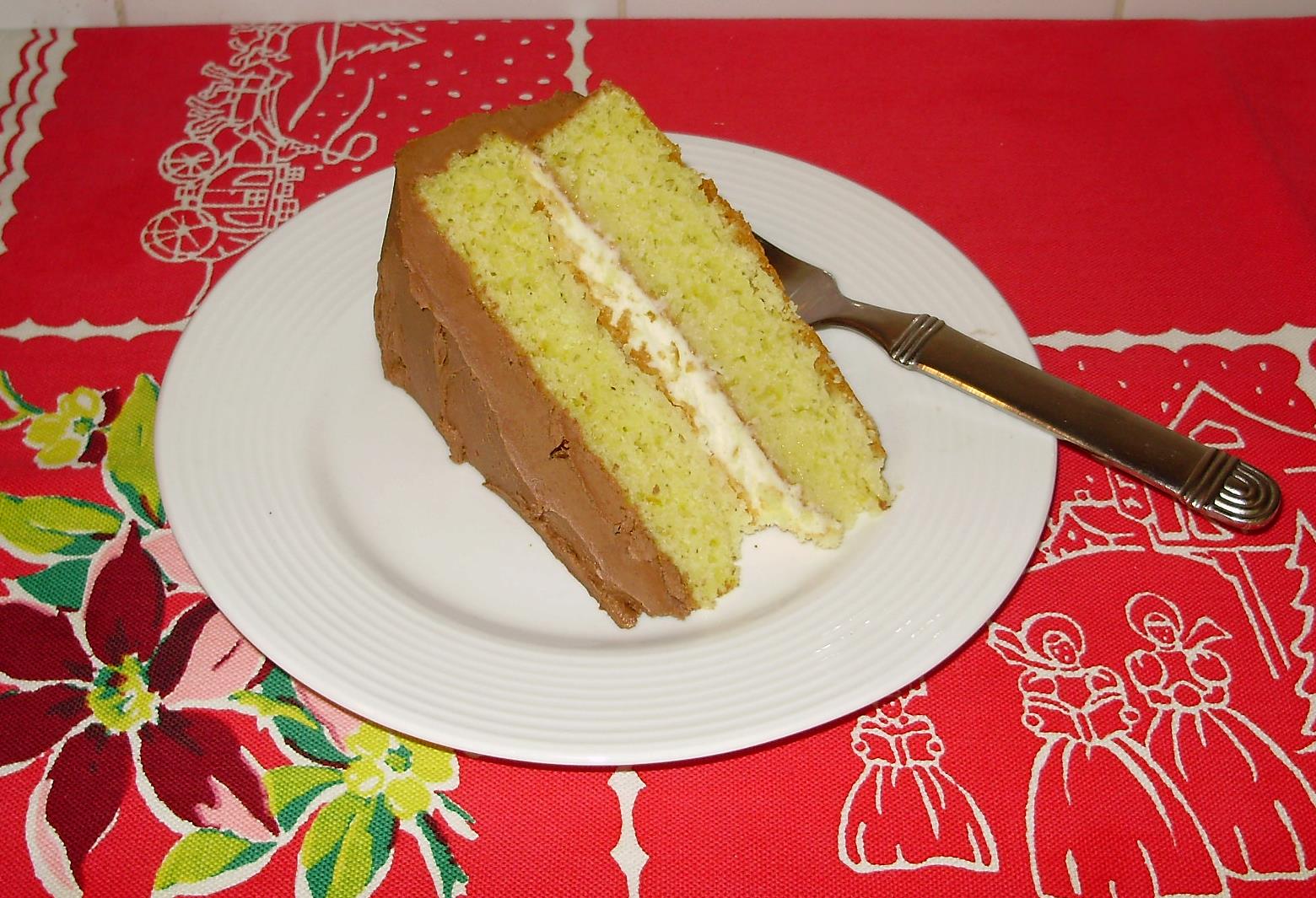 No recipe required! You will need a 16.5 oz. roll of Pillsbury “Eat & Bake” Sugar Cookie Dough, a container of Pillsbury Creamy Supreme Vanilla Frosting, and a bag or box of sweetened coconut flakes. (You won’t use all of the latter two things.) These directions make 16 cookies. 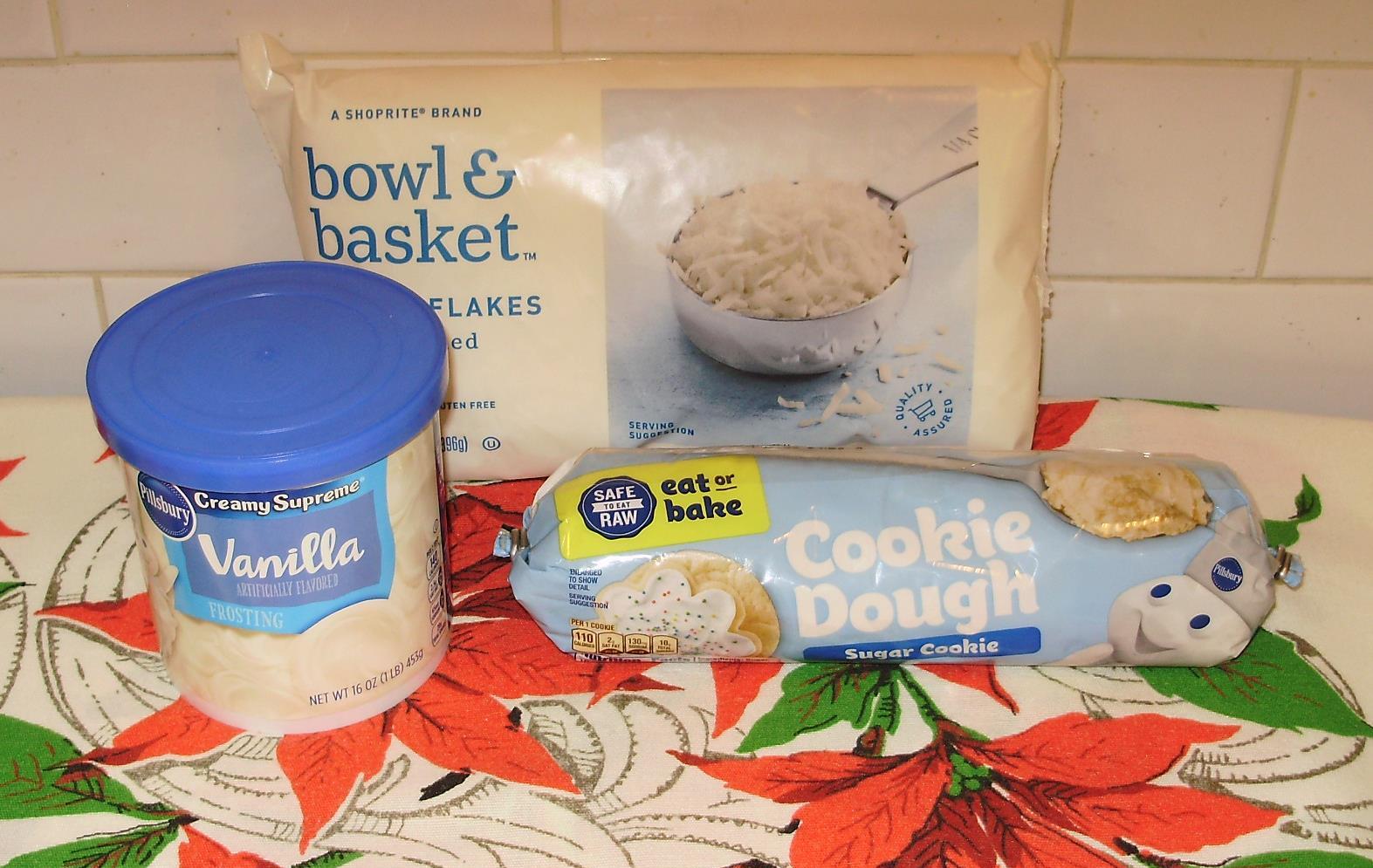 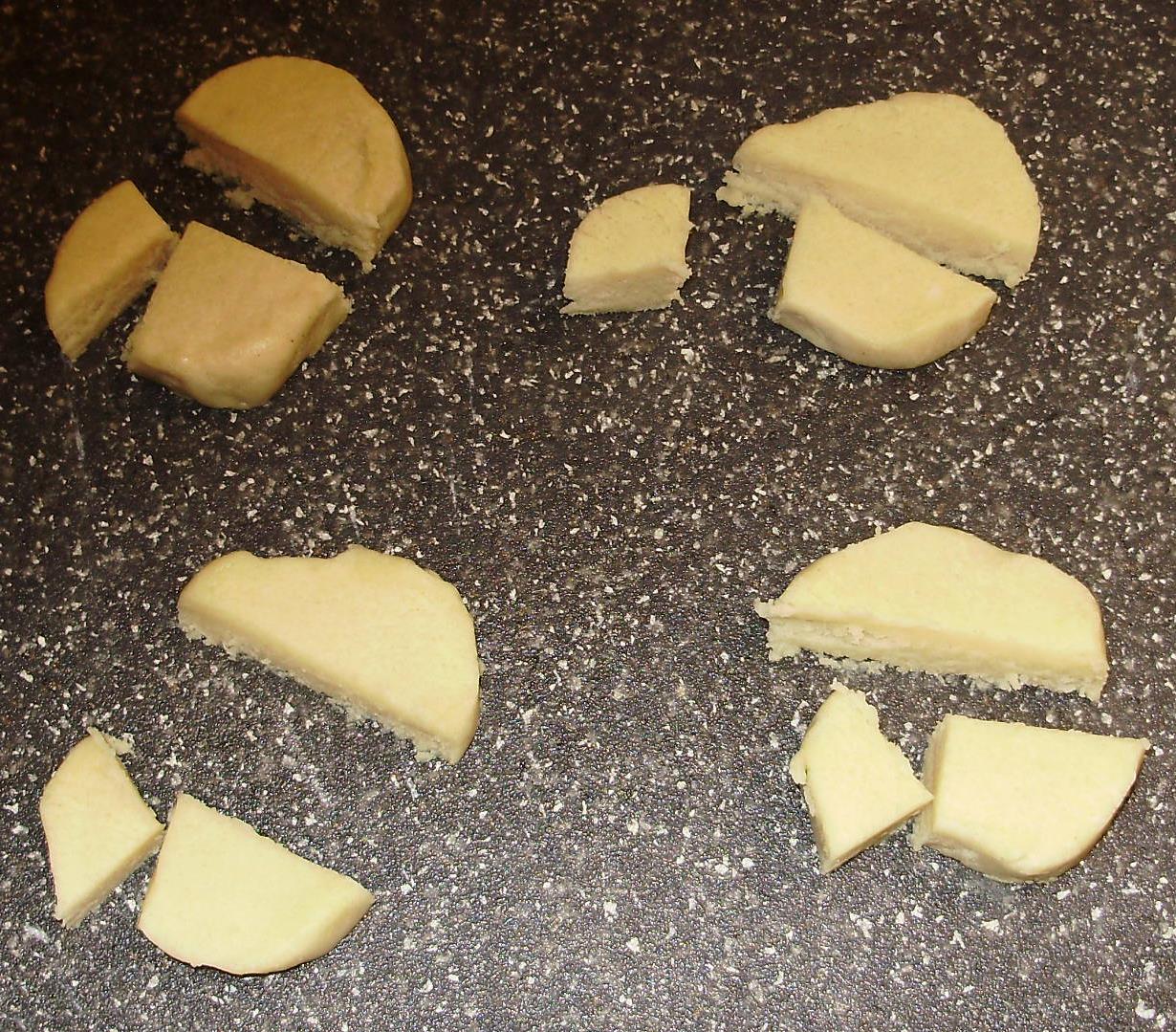 Shape all of your dough pieces into balls. Arrange the dough balls into snowman shapes, a large ball, a medium ball, and a small ball. Set them far apart, as you see in the photo. The dough spreads a lot as it bakes. 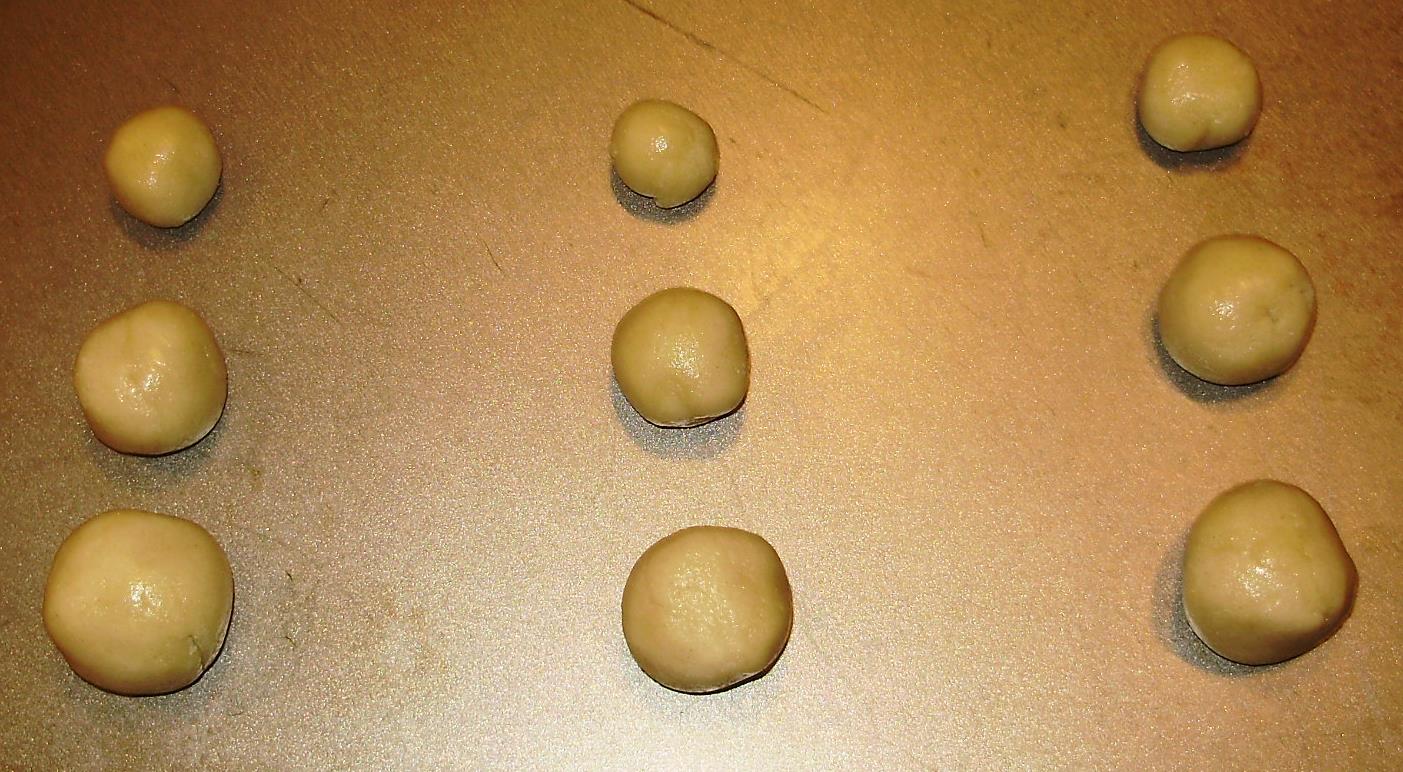 Bake them at 350 degrees for 10 minutes. They can be a tiny bit brown at the edges but do not overbake them. 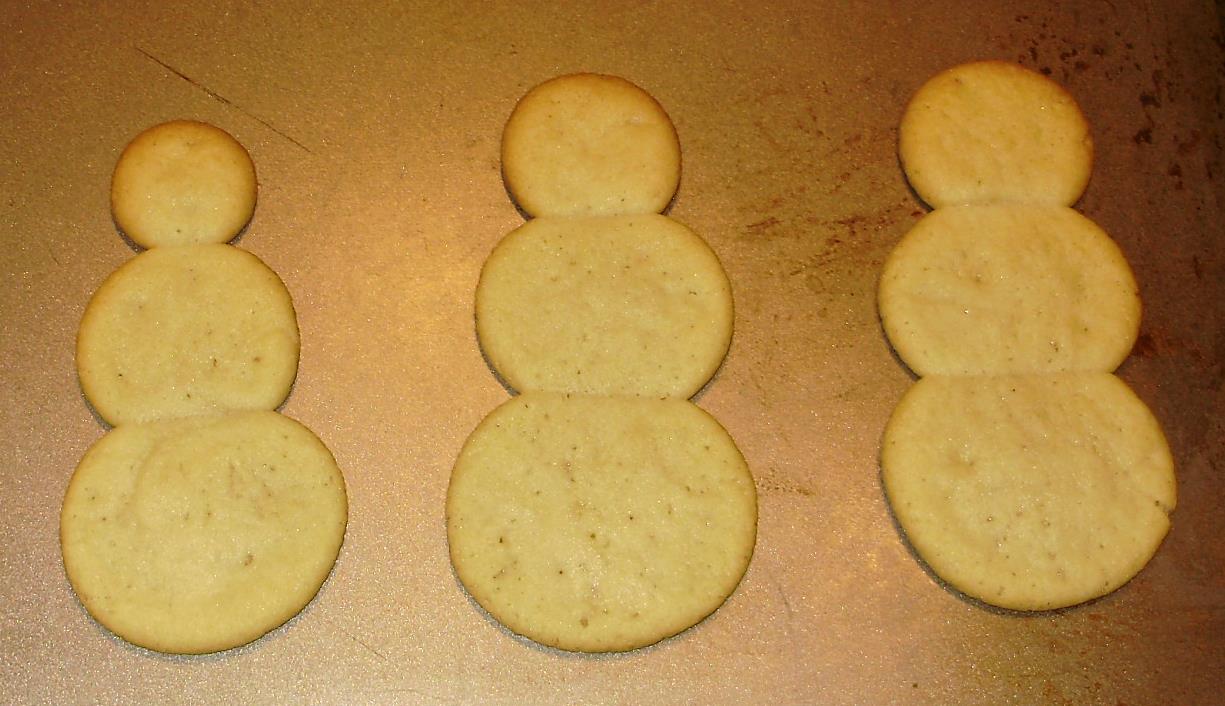 Let them cool for 2 or 3 minutes and then gently remove them with a spatula. Let them cool completely and spread a generous amount of the frosting on them. It doesn’t have to be smooth. Pat coconut on top of the frosting, tidying the edges so it doesn’t obscure the snowman shape. Add silver dragees for eyes. If you want to be fancier, you can tint some icing with food coloring and add a scarf and/or buttons, or you can use more silver dragees for buttons. You can also use a sliver of candy corn for a nose. 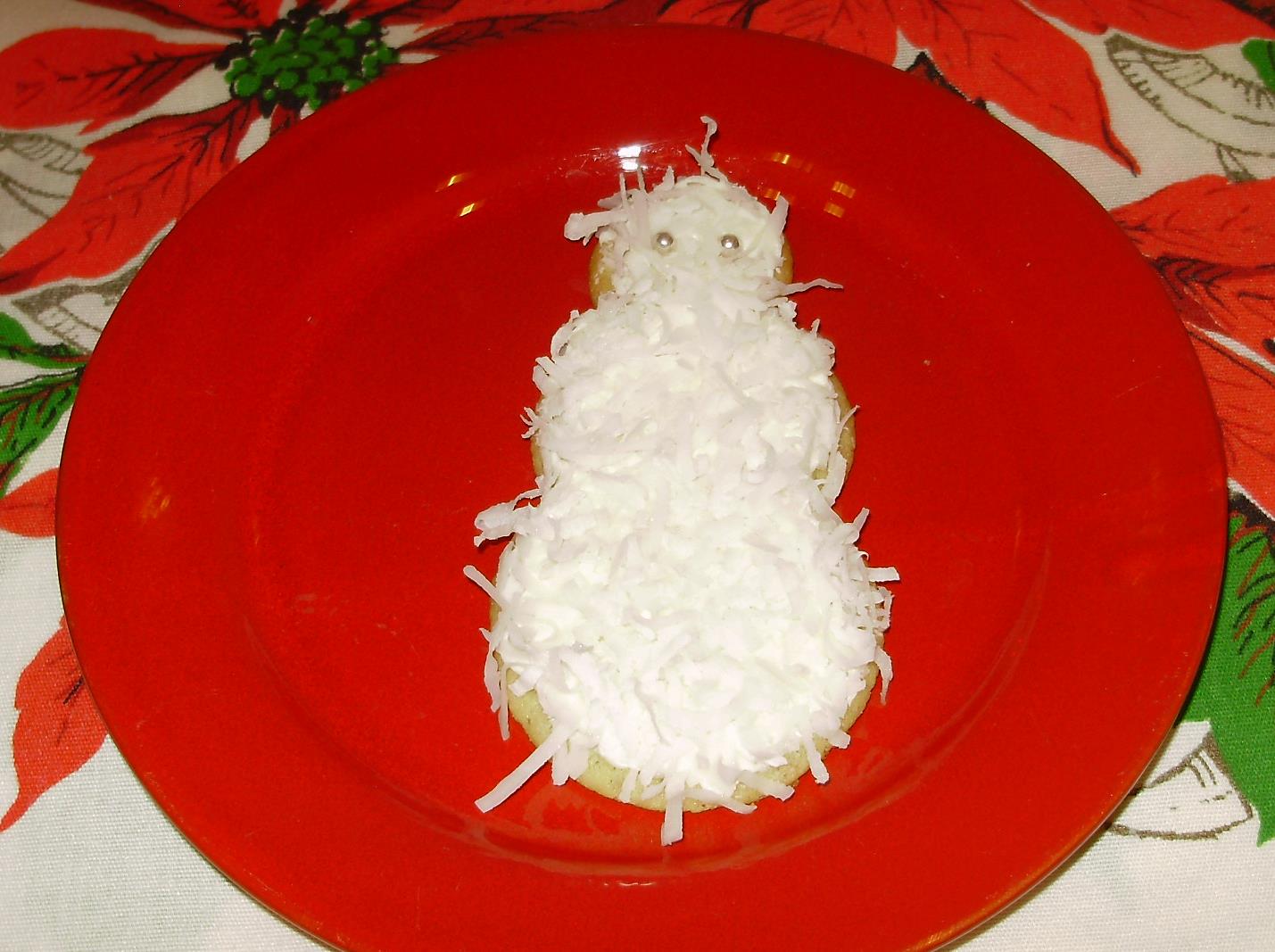