I found this curious object at an estate sale last year and realized it was a commercial version of a device we made with wooden spools and little nails when I was a child. It dates from the era before everything was plastic, so like the handles of vintage kitchen tools, it’s made of wood and painted with a bright enamel paint. 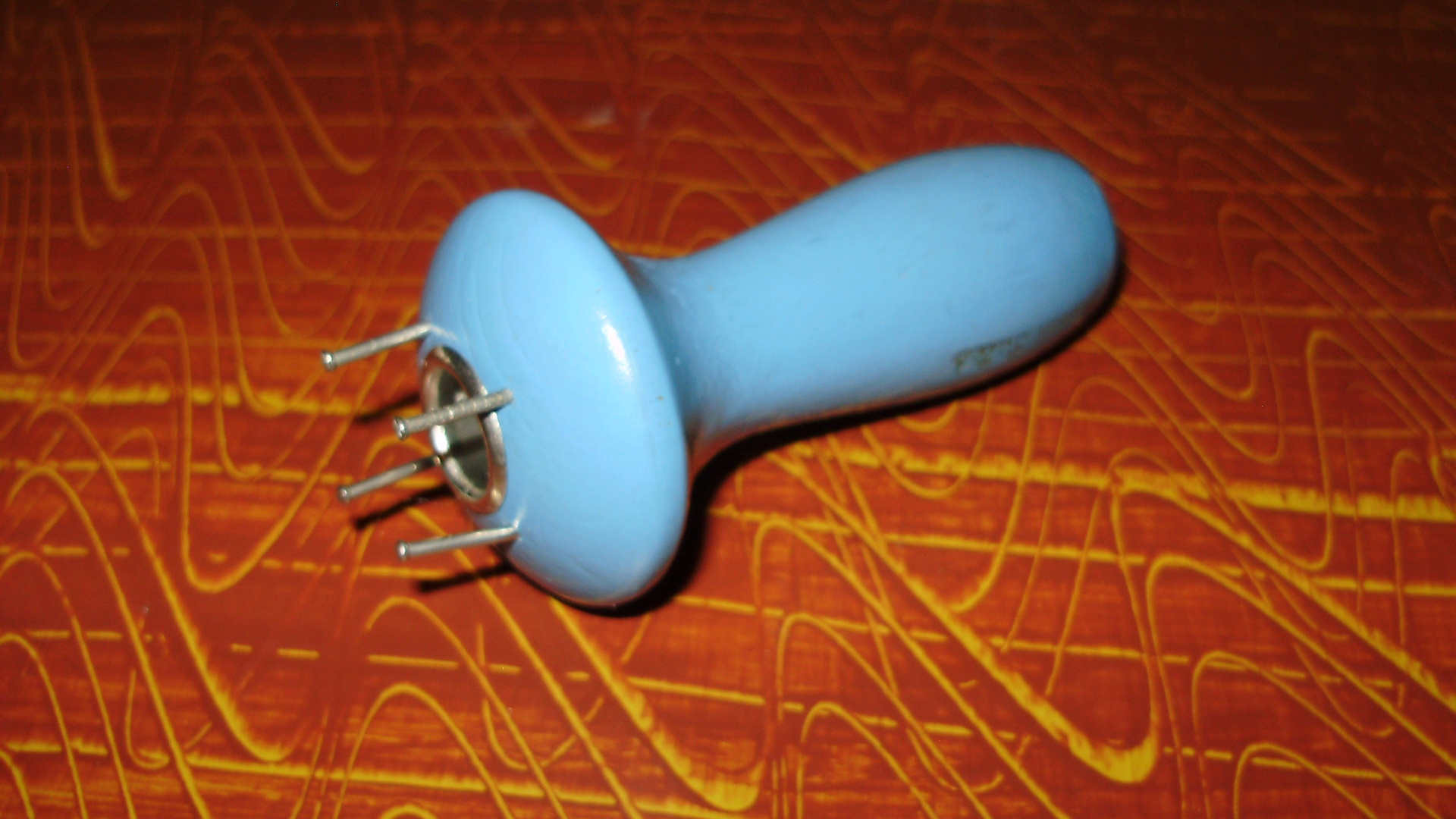 Old as it is, the instructions it originally came with had been preserved too. Note evidence at the very bottom of the instructions that it predates the era of zip codes. Susan Bates was located at 366 Fifth Avenue (Very classy!) New York 1, N.Y. 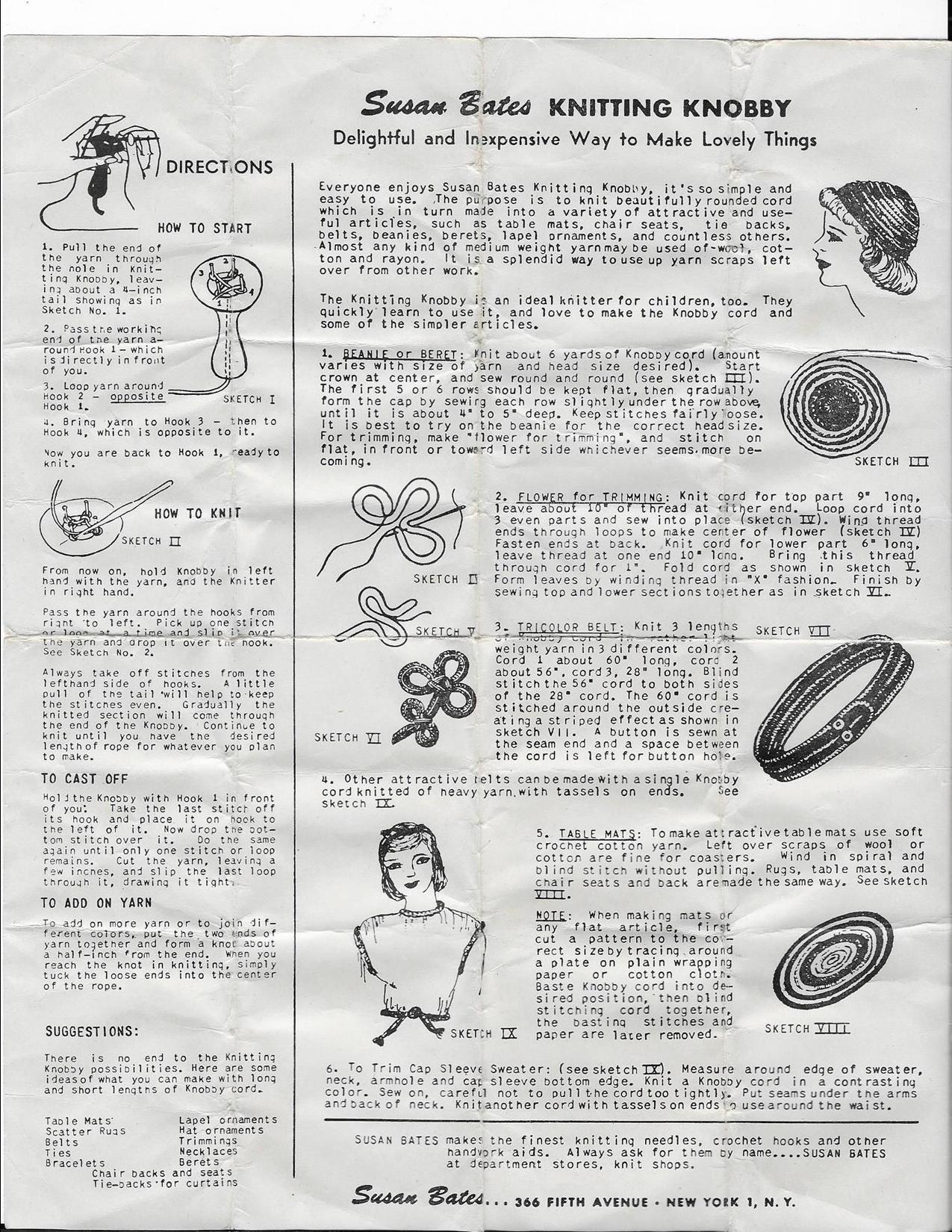 We didn’t call them Knitting Knobbies, however. I’m not sure we called them anything, though maybe spool knitters, which is another name–along with Knitting Nancy and French knitter–for the device.

Despite the fact that my vintage Knobby came with instructions carefully saved by its original owner, I had to consult the Internet to really get the technique back. (Thanks, YouTube!)

Basically it’s a kind of knitting–thus the name–though there’s no way to end up with anything other than a yarn worm. The yarn is first fed down the tube in the center and then looped around the prongs as a sort of casting on. Then the strand of yarn is drawn past the prongs one at a time and each loop is lifted over the strand of yarn and over the prong to create a “stitch,” around and around and around as the yarn worm grows. 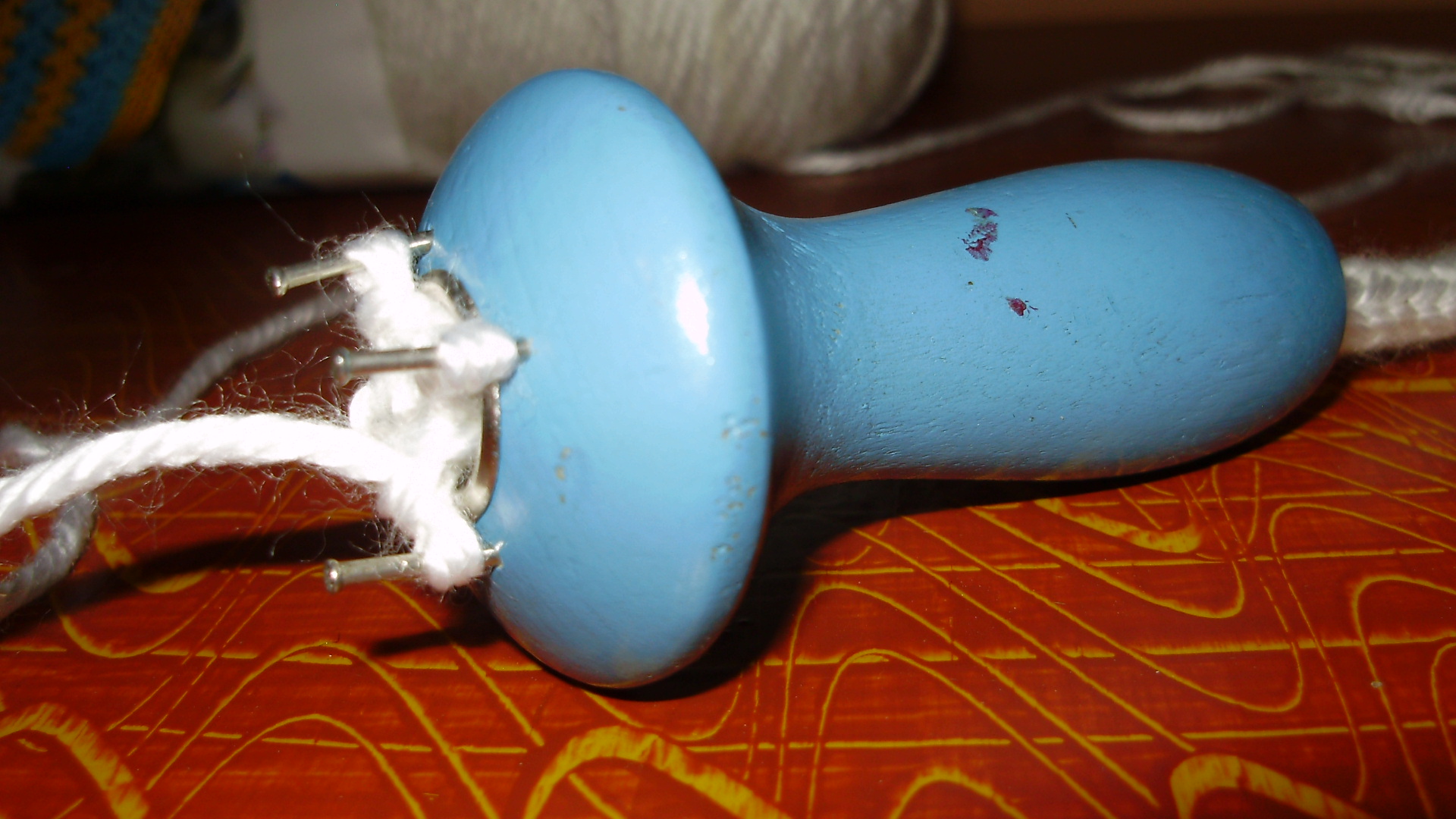 In order to do this, a tool–which can be a very thin knitting needle–is used. 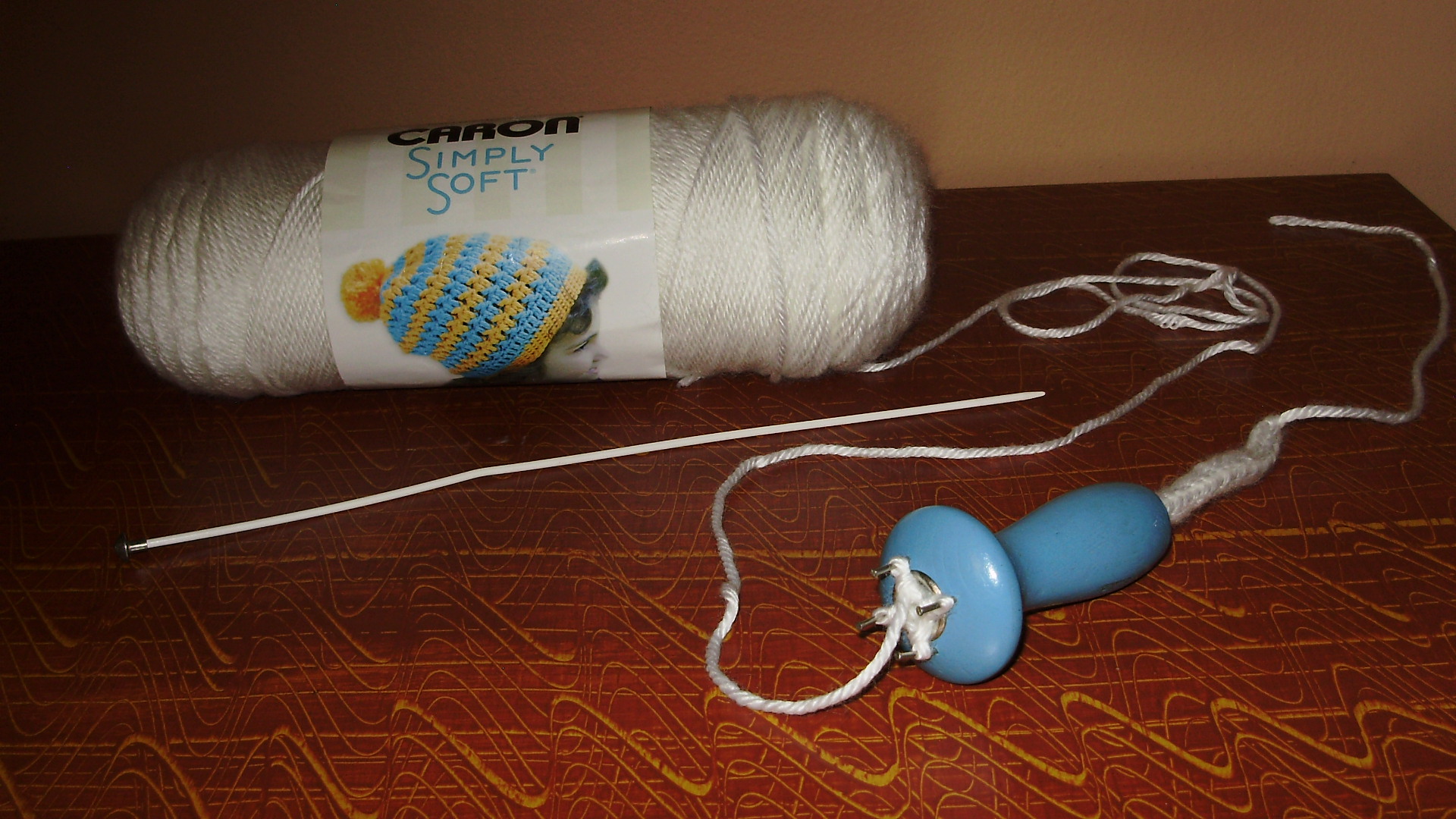 As you can see from the instructions, other things, “Lovely Things,” can be made from the yarn worms, including beanies and belts. And my daughter-in-law pointed out that a very patient person could even make a long enough yarn worm to coil into a rug.

Thread doesn’t come on wooden spools now, but I had one from a batch of sewing supplies I found at another estate sale. With the addition of four little nails I made a replica of the ones I used to make as a child. 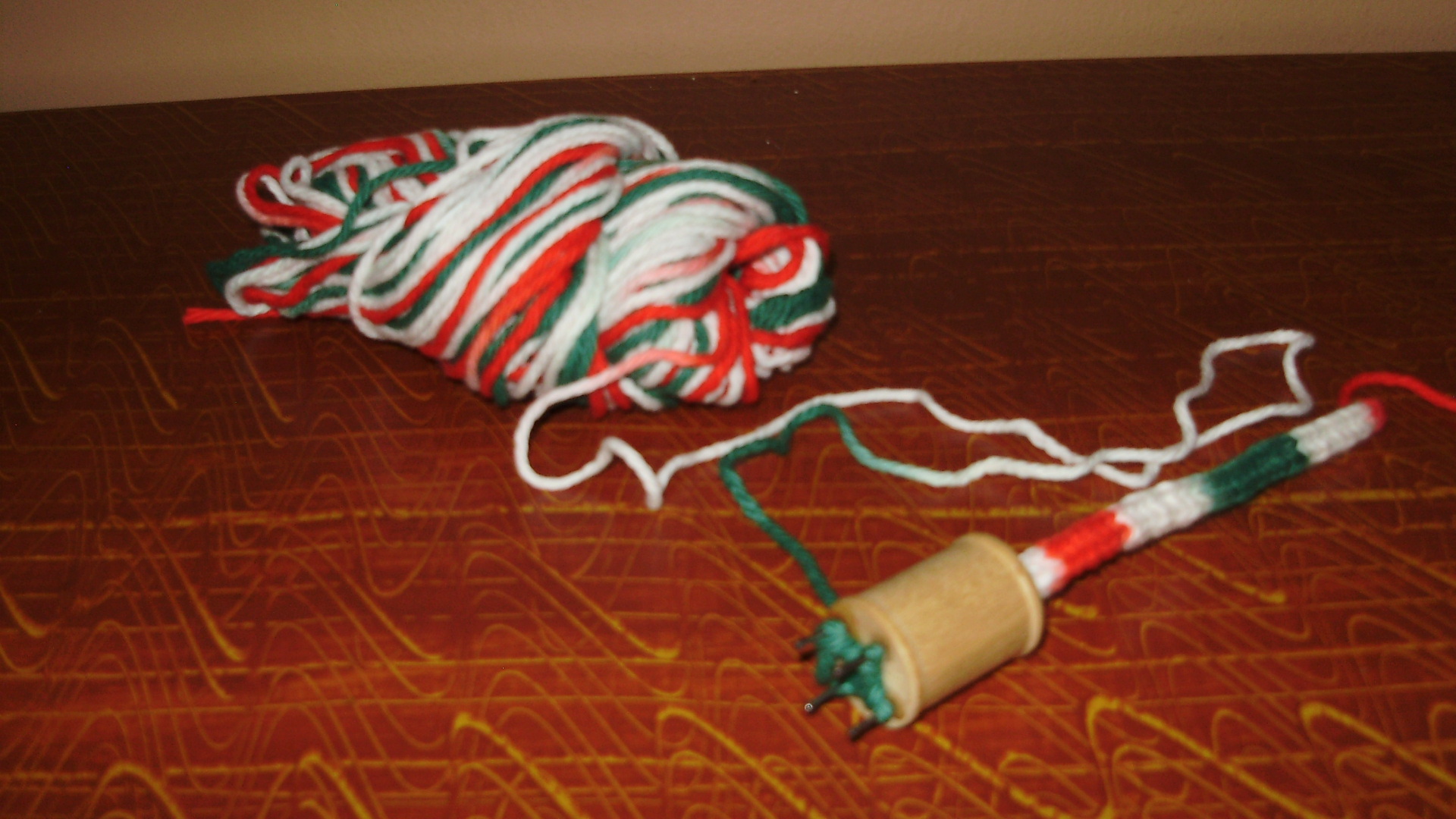