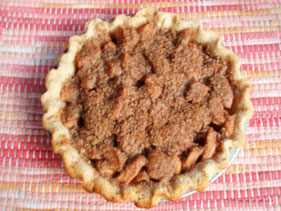 Fall is the time for apples, whether you buy them at a farm stand or at the supermarket. This pie was inspired by a Big Mama Thornton song, “Swing It on Home”. It’s the theme song of the band in Sweet Man Is Gone, and the opening verse goes like this:

I wish I was an apple
Hangin’ from a tree
Have all the sweet little men
Reachin’ after me.
What woman wouldn’t like that?

The special twist this time is that instead of a top crust the pie has a brown-sugar cinnamon streusel topping. The sweetness and almost crunchy texture of the topping contrasts wonderfully with the tartness and smoothness of the baked apple slices.

The pie pan is an old-fashioned tin one I found in an antique store in Maine. You can’t see it in the photo, but the bottom is embossed with these words:

I found a similar one at a garage sale in New Jersey, where I live, except it was a CALIFORNIA PIE and the deposit was only 5¢. It seems that in the past pies came in returnable pie pans, something like the way milk was delivered in returnable glass bottles when I was a child. I don’t know how the CALIFORNIA PIE pan made it all the way to New Jersey, but in the interests of repatriating it, I gave it to my sister, who lives in West Hollywood.

Next, sprinkle the water over the flour, salt, shortening mixture and use a fork to toss and blend. Use more water if necessary, but only a little bit at a time. The dough should be moist enough to adhere together in a ball, but not sticky. Form the dough into a flat patty, using plenty of flour on your hands, then roll it out. Use plenty of flour on your rolling surface and rolling pin too. Turn the dough frequently as you roll it out, and sprinkle with more flour, so it doesn’t stick to the rolling surface.

Here’s another method for blending the dry ingredients with the shortening, suggested to me by Theresa de Valence after she read my recipe for Eat-a-Peach Pie (August): the blending can be done in a food processor using the normal blade. Theresa uses this method when she makes a pie crust with butter instead of shortening, as I did with the peach pie. I tried the method with regular shortening, taking the precaution of chilling the shortening first, and it worked fine. It speeds the process up a bit.

If you really want to speed things up, you can use a prepared crust. I’ve done a little experimenting and discovered that the frozen crusts that come in their own little aluminum pie pans work very well. They are surprisingly flaky, and the only giveaway that they are not home made is that the decorative edge is a bit too regular, unlike the effect made by real fingers. I’ve also tried the prepared crusts that are sold in the refrigerator case, already shaped to go into your own pie pan and then curled up into long rolls that you unroll. Those are not so good. I made an earlier version of this pie with one and the crust was very tough, not flaky at all.

Be sure to use firm, tart apples, the tarter the better. Granny Smiths work fine. I used Macouns for the first version, with the ready-made crust. They are billed as “pie apples,” but the Granny Smiths I used the second time contrasted better with the streusel topping.

Mix all ingredients, adding lemon juice first, and pile in the prepared pie crust, smoothing out so the top is level.

Blend all ingredients well. If you used the food processor for the crust, you can use it for the topping as well. Otherwise, use two knives scissors fashion. The butter should be very well blended so that the mixture resembles coarse sand.

Spoon the topping over the apple filling, smoothing it out into an even layer.

Bake the pie at 425 degrees for ten minutes, then reduce the heat to 350 degrees and bake for 35 to 40 minutes more, or until the crust is evenly browned.

I served it with heavy cream, not whipped, but several of my guests opted to have it plain and said it tasted very good.

Next month: A pecan-chocolate pie inspired by a wonderful dessert my husband and I ate at a soul-food restaurant in Maine.